On our first visit to Queen Margherita over the summer, we were hesitant to rate it too too highly, as we needed to try more pizzas and prove that it wasn’t a fluke. This spot in Magnolia is located in an unassuming little strip mall and depending on where you live can be a trek to get to, but we promise you it’s absolutely worth it.

Revisiting Queen Margherita after a few months away proved to us that they deserve all the praise we’ve been giving them in the meantime. They’re now not only our highest rated Old World style, but our highest rated pizza in Seattle to date. Sauce, cheese, crust, and toppings are all too quality and delicious. Service and atmosphere is warm and welcoming. It’s official – we give Queen Margherita in Magnolia a revised rating of 5 out of 5!

Kerri came back intending to taste the pepperoni ($16) but had a hard time choosing it because of how much she loved the Queen Margherita ($16) last time. Ultimately going the pepperoni route, she can now confirm that she likes the Queen Margherita better, but that’s simply because she could taste the cheese and sauce more clearly. She praises the sauce for being incredible, cheese being fresh and full of flavour, and the pepperoni for being abundant and perfect, without being too greasy. It’s sometimes hard to do pepperoni on a neapolitan because the crust can’t always support it, but this pizza’s crust was both thin and sturdy. She’s yet to be disappointed by a pizza here and doesn’t expect to be.

I still don’t have any complaints about this pizza except that I don’t like when I only have one slice left. I liked the Queen Margherita and the Margherita ($14) the same and more than pepperoni, but if I was forced to choose between Queen and regular, I’d choose regular because I prefer the bright taste that comes from the regular mozzarella. We’ve been on a neapolitan kick lately, but the sauce and crust here stand out a lot from the pizzas we’ve had lately.

We brought my mom along to this special pizza meeting, and it was the first time in her life sampling neapolitan pizza. “I like that you’re not bloated when you leave,” she said. “I liked the burnt spots. The buffalo mozzarella was good but I liked the fresh mozzarella better.”

It was Adrian’s first visit here as well. He thought it was pretty good and confirmed that it was in fact pizza. “I thought the Margherita was nice and light,” he said. “The pepperoni wasn’t too overwhelming with pepperoni flavor despite being covered in it.” 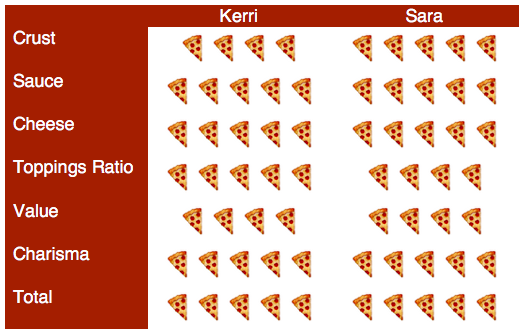