Better late than never, we finally made it to Southpaw.

When chef John Sundstrom moved Lark to a new location, its former location on 12th Avenue in Capitol Hill  switched gears to become a pizza spot with a Neapolitan-style wood fired oven out back. But instead of replicating soft Neapolitan crusts, Chef Sunderstrom aimed to make these pizzas a little sturdier with a special blend of locally sourced flour.

And that crust is what makes the difference here. It’s unlike anything we’ve come across so far in Seattle. Its sheen makes it look like it will be very greasy and buttery, but somehow it’s incredibly light. The pizza slices look heavy from toppings and cheese, but the crust still doesn’t buckle underneath them. It’s crunchy but soft all at the same time and has a texture that almost makes it seem like a sourdough bread.  The top of the crust is bubbly at the top with a bit of char (I was concerned what Kerri would say), but it certainly didn’t turn anyone off the way I was worried it would.

While traditional takes on cheese (Lefthook, $19: four cheeses and tomato sauce) and pepperoni (Uppercut, $21: tomato, basil, pepperoni and mozzarella) are easy go-tos, this is also a place that will please adventure pizza eaters. Our guests opted for the Champ ($22: romanesco, tallegio, pine nuts, parsley, tomato sauce), and there are options to add selected meats, cheeses and veggies to most pizzas on the menu. 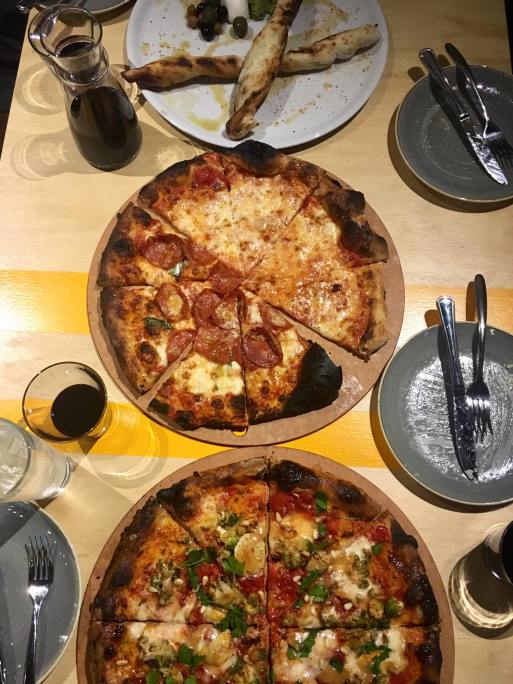 We opted for two pizza halves as the pizzas here can be sold as quarters. After some confusion on my part at the register (it’s been a long week), it turned out the two halves were a great choice and were cooked fresh. I was worried that ordering a quarter meant it would be a dried old slice heated up like what you’d get at a NY-style place, but these were very freshly cooked.

Sadly, it’s Friday during Lent so Kerri could only eat a cheese pizza. She loved the cheese mix because it made the pizza much more interesting than other new world-style pizzas of late. She obviously didn’t care for the burnt spots as much as other people might have, but I don’t think it affected too much of her official rating. She knows that the combination of vibe and pizza means she’ll be back again.

It was a bad day for Kerri to not eat meat because this was the best pepperoni I’ve had in Seattle. The meat itself was thin and didn’t come with a pool of grease, and the basil that was cooked with it made it all the more amazing. I know a full basil leaf is usually thrown on fresh in the world of pizza, but the cooked version was a perfect fit with the rest of this pizza. Again, the crust here was the star of the show for me, but I have no complaints about anything else except that I would have loved a little more basil. When thinking back on this pizza just after eating, it became obvious that I couldn’t really remember the sauce. I don’t know if this was because it was too light on sauce or if everything just came together perfectly where the sauce didn’t stand out. But in the end it probably doesn’t matter because whatever happened to the sauce, this was still a great piece of pizza. 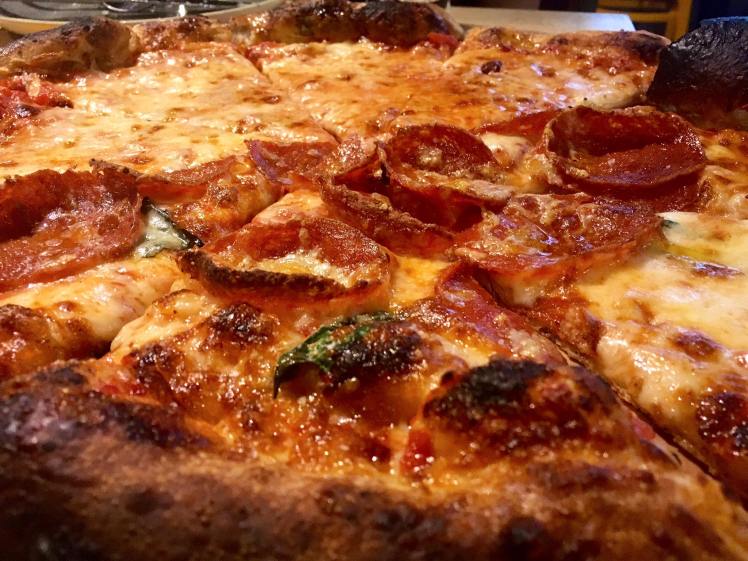 Our special guests ordered a Champ pizza, which looked very healthy to us and blinded them with its promise of pine nuts. However, they think they might order differently next time. Chelsea claimed her slices didn’t have a lot of flavor. “It was really heavy on the broccoli,” she said. She figured out later that it was actually romanesco.

“I really loved the crust. Like LOVED,” Maureen said. “I liked that it was thin and soft but it held its own. It was close to being memorable except for the tomato sauce. It needed more flavor.”

It’s important to note here that even though $6/ slice might seem high, the slices are actually a quarter of a pizza and all prices include service. This gives it extra points in my book because it seems to be the only restaurant I’ve been to in Seattle that understands how to properly move away from tipping by incorporating wages into the cost of food. Comparatively, a lot of restaurants now  just slap an extra 20% gratuity on your bill while telling you that you don’t have to tip. Southpaw has a great system in place to move away from this. We were also really surprised that it seemed like only two people were working at the restaurant during a fairly busy time and everything ran so smoothly you would have thought there was a much larger staff.

Overall we gave our pizza halves at Southpaw a 4.25, one of our highest Seattle pizza scores. Obviously with high potential for improvement after Kerri gets a fresh pepperoni. We gave her a few slices to reheat at midnight though. We’ll see what she says.