When we embarked upon our pizza pilgrimage to Naples, there was one pizzeria that came up time and time again as a must-visit – L’Antica Pizzeria da Michele. Some may recognize it from the book and movie, Eat. Pray. Love. (not that we recommend you should), but it has actually been a Naples mainstay since 1870, making it one of the oldest pizzerias in the world. Just before our trip, Da Michele opened a location in London, which was our final stop before heading back to Seattle, so we were faced with the golden opportunity to try and compare the two very different locations.

One thing is consistent between the two locations, and that is that Da Michele is a simple pizzeria, with a simple menu. You get two choices: margherita or marinara. And trust me, you don’t need any other options at this place. Outside of the menu, the Naples and London pizzerias could not be more different. Let’s take a closer look at each. 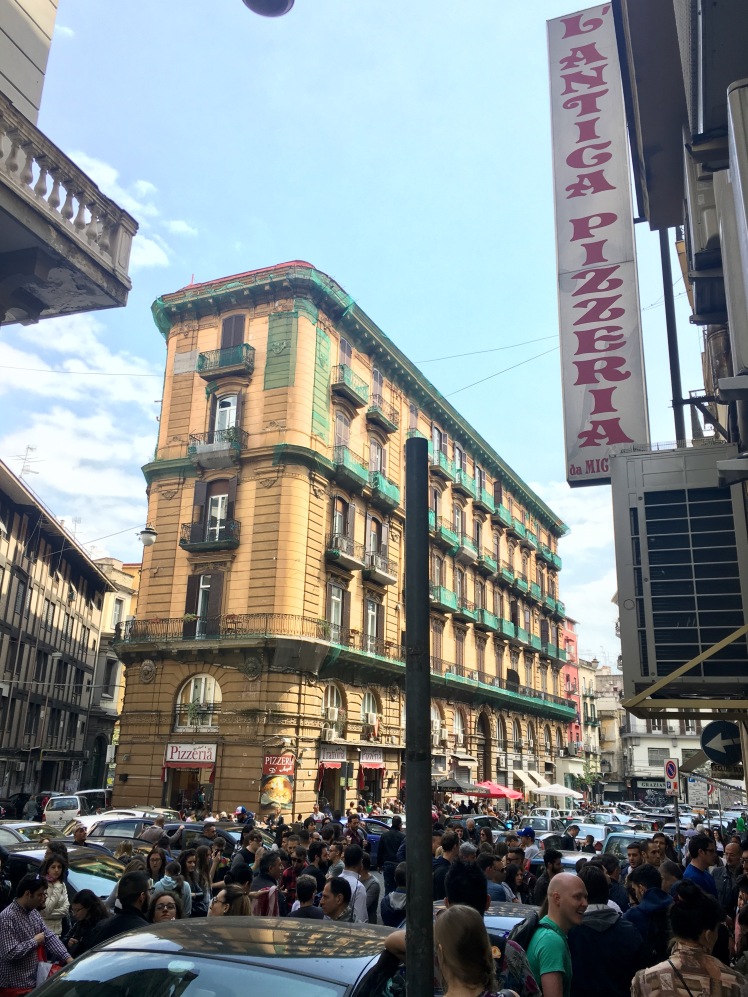 Naples is a chaotic, overwhelming city, filled with character and energy. It’s a truly exceptional place. The original Da Michele fits right in with the personality of Naples, and is certainly not the place for any lover of organization. When we arrived at Da Michele on Easter Monday, we were basically met by a giant mob of humans. Everyone in Naples is standing around waiting for their friends to get off of work, but it seems most of them were standing around at Da Michele. The tiny pizzeria has somewhat of a system to deal with the crowds – they pass out different colored tickets with the number of your place in line. They slowly work through each color group in numerical order. It sounds simple, but the chaotic part about it is that if you do not react to your number being called within seconds, they are on to the next one. So everyone crowds around the door, ready to pounce the second their color and number combination is called. 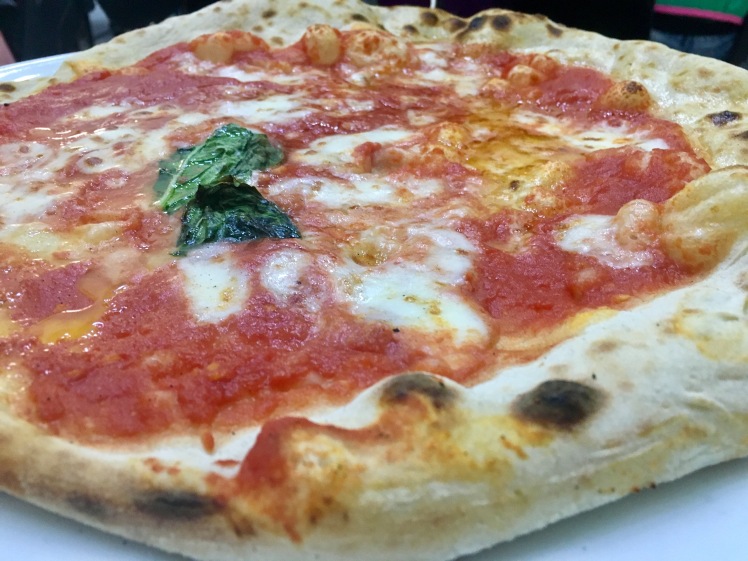 After about two hours, and street side fried pizza snack, we were finally in. We selected our pizzas – margherita with double mozzarella for me and a regular margherita for Sara. Coupled with a few beers, this entire meal cost us about €15. This is about when I started devising a plan to move to Italy.

The pizza at Da Michele was everything it was hyped up to be, and more. The fact that they even offer double mozzarella is a way to my heart, and it was the greatest cheese to ever touch my lips. 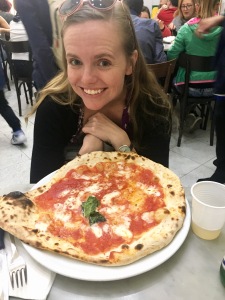 Something truly magical happens in the soft, soupy center of the pizza, where the cheese “juices” meet the sauce, and create a flavour explosion. It’s hard to even rate a pizza like this, because it’s the type of pizza that sets the standard for all the rest.

Sara agreed that this was the best pizza ever, noticing how all the parts of this pizza came together so much that it was hard to differentiate them. For her, it was the crust that was the best part, with a new and different texture that we are still trying to find a way to describe.

Da Michele was our first pizza in Naples, and it quickly became the gold standard that we compared all other pizzas to. We think that our exorbitant wait had a lot to do that it was a holiday, especially since the crowd was filled with a mix of Italians and tourists alike. On a normal day, we hope that the wait isn’t bad, but even it is, it’s totally worth it. 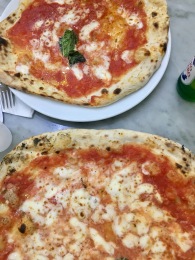 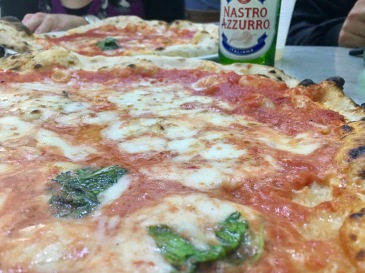 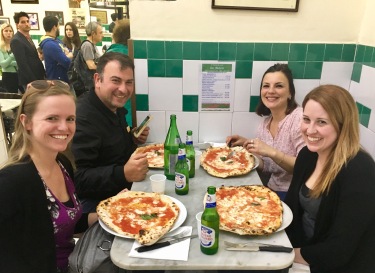 We don’t know them.

Dining at Da Michele in London was a complete 180 from our experience in Naples. Rather than spend two hours in an Italian mob, we waited for our table across the street at a local pub, until we received a text message from the restaurant. When it comes to organization and ambiance, the London location obviously wins out. But the chaos of the original location actually adds to the charm.

The menu in London is the same, albeit more expensive, due to the cost of importing ingredients and existing in London. Sara and I selected the same pizzas here, in order to properly compare. But just as Guinness tastes the best in Dublin, Da Michele tastes the best in Naples – maybe it’s the water?

I thought this pizza was still quite good, all things considered. The crust was a bit uneven on mine, very thin and crispy on part and fluffy and soft on the rest. The cheese and sauce were both quite tasty but the magic middle didn’t happen this time – maybe that’s something that only the special wizardry of Naples can produces. It was still definitely one of the best pizzas I’ve had, but most of the Naples pizzas were superior.

Sara concurred that this was a good pizza, but it was different to Naples. The biggest difference was that the crust was fluffier and had a different texture – the oily dense element that we found in Naples was more pillowy and fresh. Overall, all the elements of this pizza were there – crust, sauce, and cheese were all good on their own accord – but it lacked the magic that we found in Naples.

For this visit, we actually had special guests! Vicky claimed, “There was too much of it. For a regular size pizza, it was too big.” (Honestly, though, who says that?). It was also her first ever Neapolitan pizza. Lisa provided a more acceptable review, stating “I thought it was very good. I liked the middle the most. I liked the nice and fluffiness of it – you could tell it was cooked and not just heated up.” I’m a little concerned where she’s been getting her “just heated up” pizza though. Kyle is a vegan which is sad because he doesn’t get to eat cheese. But he’s had some experience with cheese-less pizza. “Of my marinara experience, there’s better value marinara available for taste and price. The price and taste does not justify the wait.” It is important to note, though, that Kyle in fact did not wait. He timed his arrival so that we did all the waiting for him.

I think we all knew who was going to win this one before we even left Seattle. You can’t beat the original. Especially when the original has been around almost since margherita pizza was invented. When you only do two things, and you’ve done them for almost 150 years, it’s hard not to have achieved perfection. That being said, if you need to eat a pizza in London, you should probably eat it at Da Michele. And if you need to eat the best pizza in the world, hop on a plane to Naples, and be prepared to wait.