There has long been a dispute among the members of the Seattle Pizza Coalition about whether Ballard Pizza and Frelard Pizza are indeed the same thing. I’m a strong believer that Ballard Pizza is superior (and fluffier) though the Frelard atmosphere wins. Kerri thinks they’re both the same. To better educate our opinions, we had one final pizzeria to check off this Ethan Stowell pizza trio. On a Friday night we hit up an office building courtyard in South Lake Union to do our final taste test at Ballard Pizza Company SLU: the pizza spot most likely to confuse your maps app. 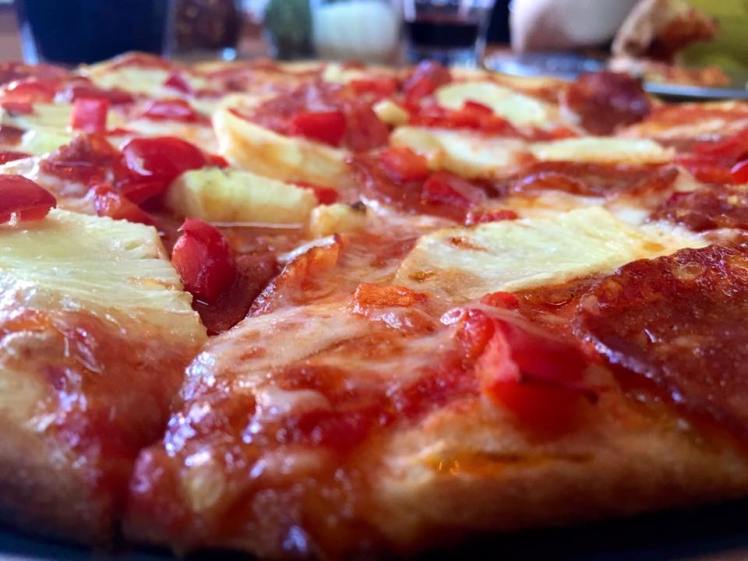 Kerri and I decided to each order a medium. We both liked the pizza here but neither of us were overwhelmingly impressed, and agree the crust at this location is a little tough to deal with. The ambiance here in “the Amazon” is a little lackluster but we are here to review pizza, not corporate architectural choices.

Kerri’s pepperoni (medium- $18) would soon be tainted by a splinter from the table that she somehow jammed into her finger behind her thumbnail. Her nail was like a window  to the splinter. It was very odd. Before her baffling skewering, she expressed that she thought the pizza was the same as Frelard and Ballard. The crust was a little tougher than she liked, but it was still tasty, just not a table silencer. She appreciates it when she eats it, but she doesn’t think about it later. The pricing was also a little distracting because a fancy pizza can cost more than a basic pizza. She thought it was shady and recommends ordering a fancy pizza minus ingredients to save a few bucks.

I didn’t have much else to say about my medium pepperoni, pepper, and pineapple pizza ($19) that Kerri hadn’t already said about hers. This was slightly preferable to my other experiences at Frelard, but I still like the original Ballard Pizza Company better. This pizza tastes fresh, but I wish there was more sauce and less hard to manage crust. Perhaps the outdoor setting here makes the pizza cool down too much and get flat like Frelard.  But I still appreciate the flat slices of pineapple and this pizza is always a good compliment to whatever wine we get.

Guest commenter Katie thought she’d just keep us company and get a salad but when she found it to be not very nice and served in an airplane-ready plastic container, she splurged for a few slices. “It was ok. The Hawaiian was better than the ‘special’ since they never said what the ‘special’ was,” she said.

We give this pizza a 3 out of 5. Currently we’re trying to figure out a way to do a blind taste test between both Ballard Pizzas and Frelard to settle once and for all if these pizzas are actually identical.