The International District might not be known for pizza, but amongst the plentiful global options, World Pizza serves up vegetarian slices or whole pies in a small space on King Street. Frequented by orders for takeaway pizza and coffee, they also serve beer and wine and have a few tables for dining in. 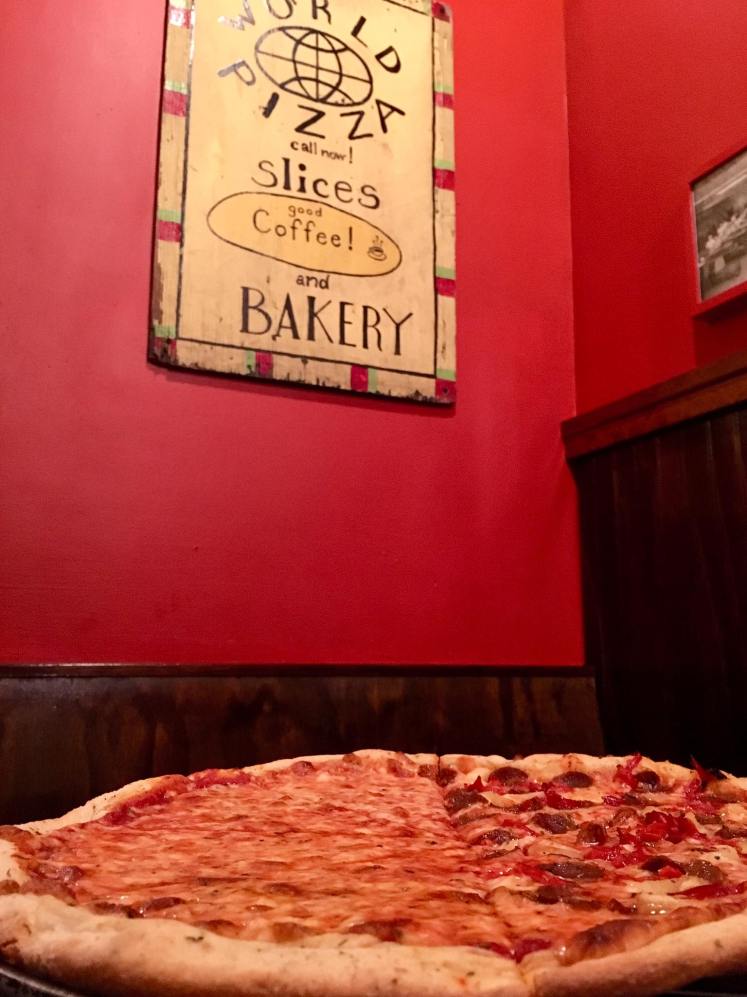 We ordered a large pizza with half cheese and half “pepperoni,” pineapple, and peppers. Keep in mind this is a vegetarian place, so the pepperoni is actually field roast and vegan (Blonde moment: asking our special guest if they were vegetarian in case they didn’t want me to order pepperoni all while knowing we were eating at a vegetarian spot).

While World Pizza’s specialty pies (roasted red potato with gorganzola or wasabi pineapple) might be where they’re strengths are, the more traditional options didn’t quite hit the spot for us.

Kerri thought the pizza was weird and wasn’t shy about her sadness that it didn’t have the hallmarks of pizza she typically looks for. She found that the crust was good, but that it tasted like take and bake. She also picked off the vegan pepperoni. Nothing about this pizza was outstanding enough to make her want to visit again.

I was a little less horrified than Kerri was and surprisingly didn’t notice this pizza was 100 percent vegetarian, even though in retrospect, a lot of pizzas already are. I liked that the sauce was abundant and the veg toppings (field roast pepperoni, red bell peppers and pineapple) were quite fresh. But I wouldn’t travel for it. The crust was a major detractor for me as it tasted a bit make at home. But many would enjoy its crispy bottom.

Special guest Valerie wasn’t as judgy as we were. “By far, my favorite part was the crust. I’d be curious to see how it holds up in the leftover category,” she said. Sadly the remains were eaten by her boyfriend as soon as she got home and the leftover rating will forever remain a mystery.