Can a restaurant that specializes in both pizza and dumplings actually be good? Yes, yes it can. A new kid on the Fremont pizza block, Chinapie is the newest restaurant from Chef Vuong Loc and sits right next door to Pomerol, his other Fremont restaurant that you might have heard of.

When we heard news of Chinapie’s recent opening, we were pretty excited to run out and try it. Half the coalition is a mildly passionate about dumplings after a recent adventure in China and frequent special guest Amy shares that as well.

It’s important to note here that a dumpling + pizza restaurant doesn’t mean they put dumplings on pizzas. That might sound fun, but I’m sure they’ve left that off the menu for a reason. The pizzas at Chinapie are neapolitan style, and while the basics like margherita are available, quite a few pizzas on the menu cater to adventure pizza eaters with toppings like potato (actually shoestring fries from what we hear), bacon, clams, and bechamel on the chowder pie and chicken tikka sausage, tomato cream curry, pickled onions, and jalapeños on the Neli pizza. On the menu, the small plates at the top are Asian inspired and where you’ll find the dumplings. In a perfect world, you could presumably order a few pizzas and few dumpling plates for the table and share everything around. But we don’t like to share pizzas. Dumpling sharing is ok though.

After a hearty starter course of dumplings, Kerri dug into her pepperoni. She loved the cheese and the pepperoni here and thought the crust was good but not so good that she wanted to eat it all. On the whole, it was a pretty tasty pizza. She’s not a seasoned dumpling reviewer, but thought the ones she sampled were ok. Of them, she probably preferred the more traditional xao long bao (soup ones, I think). On the whole, she enjoyed the combination of everything and the pizza was pretty tasty. “It might be a little heavy on the hipster ambiance, but who else could come up with a combination like this?” she said.

I stuck with a regular margherita and was quite surprised at how tasty the pizza was for a place that seems to be covering a lot of ground. I didn’t come with high expectations, but I was quite impressed by the time we left. It was a fun place. The pizza tasted very fresh and as always I wished there was more sauce. The crust wasn’t too burnt but was a little tougher than other margheritas. The trade off is that it was a Margherita that was sturdy enough to not need a fork and knife. I liked the pizza more than the dumplings but it’s a quirky place with great drinks and food to please everyone. 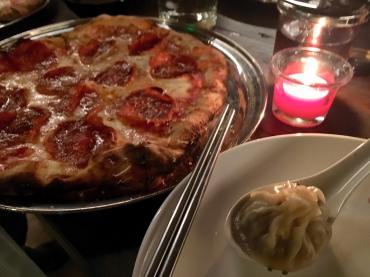 Guest reviewers Amy and Charlotte echoed that the pizza was better than the dumplings. “I really liked the salami but it was weirdly wet…”  Amy  said (#thatswhatshesaid).

“It’s good, I don’t know. I would say it’s above average. Nothing to write home about. I did like the dough. But it didn’t have tuna,” the ever eloquent Charlotte decided.

We gave Chinapie a 4/5, a good choice for a fun night and tasty ‘za.