There’s just something about a no-nonsense pizza, a red checkered tablecloth, and plastic red glasses, isn’t there? A retro trip to lunch awaited us at Big Mario’s in Queen Anne, where the 18-inch pepperoni took top marks as our favourite NY style in Seattle so far. This late night favourite expanded to Queen Anne in fall 2015 from its original location in Capitol Hill. And guess what, Big Mario is actually a real person (not an invented character) who was born in Naples and grew up in Brooklyn.

On this trip, we opted for soft drinks even though the cocktail bar was tempting.  But it was lunch and we had some serious Italy trip planning to do later. This pizza was amazing sober so imagine how great it would be on your way home.

Especially critical when it comes to east coast pizzas, Kerri was pretty impressed with this pie, proclaiming it as one of the best in Seattle before finishing slice one. She found  the crust to be soft, fluffy, and perfect while the cheese, sauce, and pepperoni were all equally delicious. It was a real no-nonsense pizza with nothing gimmicky to distract her from its pure pizza-ness. It’d probably also be a clutch in a hangover. On a personal note, Kerri’s grandfather was also known as “Big Mario” to friends and family so she’s glad this place is doing justice to great pizza.

I had no complaints about this pizza except that I wish I had green sprinklies (oregano) to put on it. I’m sure I could have asked for some but I was just too lazy and that wasn’t the restaurant’s fault. Nor was it their fault that I was so excited to eat I burned the crap out of my mouth and still didn’t slow down. While there was a fair bit of cheese involved here, I was happy that as the cheese cooled didn’t get the same toasty/ plasticky texture that some chain delivery pizzas do. I’m sure we can manage more toppings on this pizza and that it would be a fantastic delivery option. I wasn’t hungry anymoure after 2 slices so if 3 people can finish a pizza it’s also great value. I’ll be back. I also think that we should revisit Hot Mama’s again as it might come close, but doesn’t have as nice of an atmosphere.

Big Mario’s is one of the best New World pizzerias we’ve visited with a strong 4.5 out of 5. That will probably get upped to 5 once we try a few more pies just to confirm. 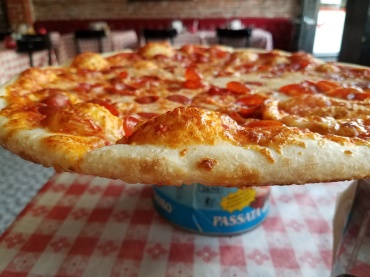