Growing up just outside Providence, RI, I thought I had a firm grasp on all the best pizzas in the state. Known for its Italian cuisine, and specializing in grilled pizzas, Providence is home to a number of longstanding greats. But it’s been a while since I lived in the Ocean State, or even nearby, and after perusing a number of “Best Pizza” lists, I quickly learned I had grown out of touch with my hometown ‘za.

Opening in 2012, Providence Coal Fired Pizza has been stirring up quite a buzz in its inaugural years, now expanding to 3 locations. Google “best pizza in Rhode Island,” and it’s sure to pop up – great SEO or great pizza? Well, it’s my job to tell you. Providence Coal Fired is the first and only pizzeria in Rhode Island to feature a coal oven – and in an interesting turn of events, their custom coal oven came from none other than Seattle, WA! 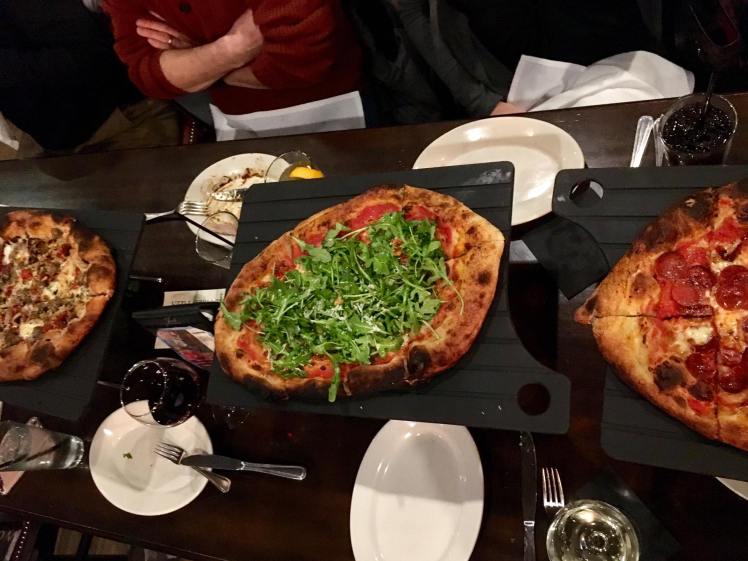 The stage was set – I was coming home for the holidays and had made a reservation at Providence Coal Fired Pizza for my annual “Friendmas” dinner and reunion with some of my best friends. I’m not sure I had ever had a coal fired pizza before, so I was quite excited to finally try this popular and unique pizza.

We sampled a Pepperoni ($17), a Rocket ($18), which is a margherita with argula, and a pizza called The Conrad ($19) with sausage, onion and red pepper. All the pizzas were super tasty, and served about two (one if you set your mind to it.) I loved the pepperoni with fresh mozzerella, and the combo of flavors on The Conrad were surprisingly delicious. A coal fired pizza may not be the best option for a soft crust lover like myself, though. The coal firing makes the crust a little too crunchy and burnt – a sentiment shared by many of my special guests. Meghan felt that “some of it was a little too burnt, but I like the combination of flavors on the Conrad.” Tara couldn’t stop talking about Trattoria Romano – “It was good overall but too burnt. I like Trattoria Romano better.” Derek pretty much agreed with my review, saying “the pepperoni was the best. I think it could have been placed in the oven for a lot shorter of a time – it was a very dark crust.”

Despite the toasty crust, all our guests seemed to really enjoy their meals. Jorge said “I thought the pepperoni was way better than The Conrad – it had way more flavor.” “The hummus and lentil salad was delicious,” said Stef, although we’re all very aware that is not a pizza. The always eloquent Tracy summed it up simply, saying “yummy in my tummy.”

Overall, I can really see why this place is so buzzed about. It’s a unique style with interesting flavours, and a great setting for socializing. If you’re looking for something a little different from the classic RI pizza staples, Providence Coal Fired Pizza is a can’t-miss option, and strong 4 out of 5 for the SPC.