After week one at Via Tribunali, it’s safe to say that we were a little disappointed by Tutta Bella. Our special guest for the evening, Amy, summed it up quite well by calling this pizza “perfectly average.” It wasn’t the best pizza we’ve ever had, but it also wasn’t the worst. We do believe that this may be a case of location, so we are still open to testing other Tutta Bellas to see if they score higher. 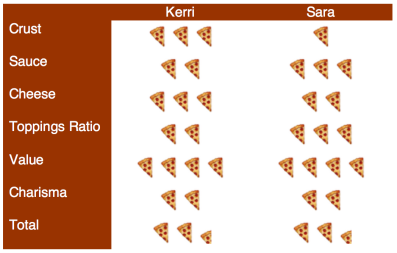 Sara believe that the value is great here, but Via Tribunali had better crust and generous sauce, though it was hard to cut. The cheese here is a bit drier and crust a little thicker and less crunchy. The taste of sauce was great, but she wished there was more of it.

Kerri chose the 10″ rather than the 12″ because she wasn’t uber hungry, and it was a great value at only $10. Unfortunately, it was lacking in sauce, the cheese got hard quickly, and there was barely any basil. Kerri celebrated her most recent birthday at the Tutta Bella in Columbia City and had a much better experience, so we haven’t completely ruled the chain out just yet.

Tutta Bella has five locations throughout Seattle, and we give this location on the Fremont/Wallingford line a 2.5 out of 5.